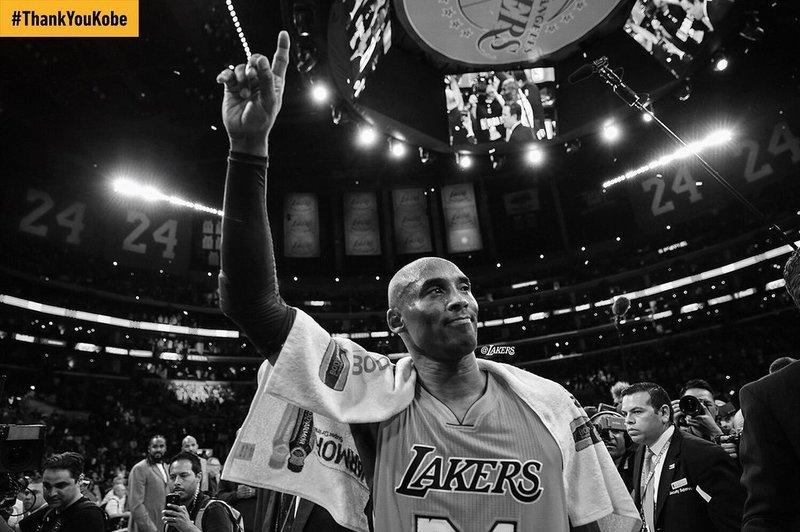 Michael Jordan. Pavel Bure. Paul Kariya. Joe Sakic. Markus Naslund. Steve Nash. Ray Allen. Kobe Bryant. These were the athletes that I idolized growing up. They were leaders. They were my heroes. I spent thousands of hours memorizing their stats from their trading cards (pre-internet), studying their moves, and reading any newspaper article I could find on them. Once, I even won a speech contest talking about one of them (it's not who you think it is). In the playground, in my living room - I pretended I was them. As an only child, some of my greatest memories was with them. And yes, I still scream "Kobeee" when throwing paper balls into a trash can. I'm aware how feeble young Sam sounds, but sports fandom was a big chapter in my life.

With Kobe's last game, every single one of those guys is now retired. The first professional sports game I ever saw live starred Kobe Bryant. They lost to my hometown Vancouver Grizzlies. Some guy named Doug West outscored Kobe Byrant. The most recent basketball game I saw also starred Kobe Bryant. They lost to the Golden State Warriors. Kobe Bryant outscored some guy named Steph Curry. In between all that, he won 5 championships, 2 scoring titles, and had an 81 point game. Those memories are still chiseled in my brain. Over the past 20 years, Kobe's brought a lot of joy into my life. However, looking back, there's something else there that surprised me: regret.

Kobe accomplished a lot during his career. There were times when I thought he'd play forever. But he had his moment in the sun, and now it's passed. He made the most out of his opportunities. And what have I done in that same time frame? We breathe the same air. We drink the same things. We have the same shoes. I know - I'm not supposed to compare, but why the hell not?

Probably because he's taller, stronger, and more talented than me. This is true, but he's also worked harder at his craft than anyone I know. In his last press conference, he dropped this nugget: "I’m telling you, it goes by fast. If you don’t give it your all, you’re going to regret it. You’re absolutely going to regret it. Don’t be that guy." In the grand scheme of things, basketball is just a game. If Kobe can take something inherently juvenile, and put this much drive, sacrifice, effort, and determination to it - surely I have more to give in all aspects of my life too, and that starts with giving up sports idolatry.

There's a popular bible verse that reads: "no one can serve two masters. Either you will hate the one and love the other, or you will be devoted to the one and despise the other. In other words, there's no more time and energy that can be spent on fanboying 'the next Kobe'. I can't spend my days being nostalgic and idolizing Kobe's career. I need to get to work if I want my own version of 81 point games.

All of this is a tl:dr; way of saying:

Kobe, thanks for the inspiration.

I've found my Pau Gasol. It's time to go chase after my own championships now.